The Santa Float will again make its way through Waterloo, bringing gifts and holiday cheer to all! The City of Waterloo, Waterloo Chamber of Commerce and Sister Cities of Porta Loo, with the help of many continued donations from individuals, businesses and organizations, have come together to make sure this tradition, which was started by Harry Wolf and the Waterloo German Band, will continue.

Check out the schedule to find out when Santa and his elves will be in your neighborhood. On the second night of each route, the route will be reversed to give young children that may live at the end of their route a chance to visit Santa. The float heads out at 5pm each evening and will be led by a City of Waterloo vehicle with red and green flashing lights so you know Santa is close by.

SANTA TRACKER - We have a Santa Tracker!! No more guessing where Santa may be on his route!! There will be a link on our website (see URL below) to access the Santa Tracker. This new technology may not be perfect, but we are so excited for you to try it out!

GIFTS FROM SANTA - Each night there will be three golden tickets hidden amongst the treats. If you are lucky enough to find one, bring it to City Hall at 9am Christmas Eve to receive a gift from Santa! (Only children ages 13 and under and eligible to win prizes.)

Brought to you by: The City of Waterloo, Waterloo Chamber of Commerce, Sister Cities of Porta Loo and the Waterloo German Band 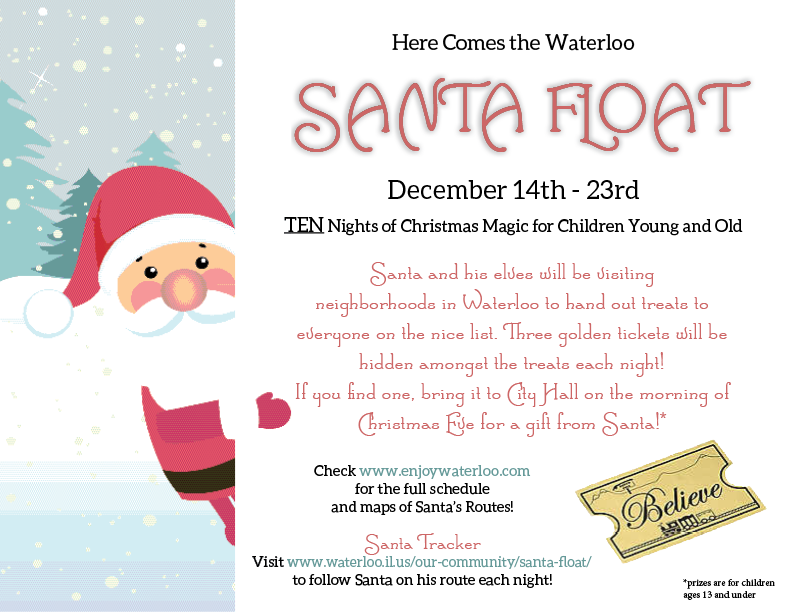